The goal of this month was BigBeat with "more melodic route this time".
And it was hard to rating
1. because there were 3-4 similar songs that worked quite well, but I didn’t find one that stood out clearly from the others.
2. Unfortunately, there were several Prodigy imitations, I thought the genre wasn’t just represented by them.
However, my personal opinion of the band did not influence the evaluation.

Because I think these "imitation" songs were the best made songs.

bedlamward: "Climb"
Nice intro, interesting sound effects.
The vocal part is the strongest element in the song.
The delay effects are good, but over time they start to get a little boring.
I don't like the snare sound. (For me missing the bottom part of the sound.)
Good song overall, but I don’t think it fits the style of the month.

Alex Van mixland: "Reboot"
Very short, almost just an intro (just 1 second longer than the rules require).
What is finished, in turn, is tastefully constructed, pleasant.
I like the bass, the progression. Clean, good sounds.
The drums are nice too.
Good starting point, but more work needs to develop into a whole song.

J I L L I A M: "Great Destruction"
Nice bass intro and the drum entrance is good.
The chorus part is a clear reference to the Prodigy. (A good combination of your style and Prodigy

)
The song, on the other hand, is a bit monotonous. (Perhaps it would be enough if the monotonous high sound that accompanies the song stopped at the chorus part, thus the structure would also be better separated).
Overall I liked and I think a little added work would be great because it’s a good foundation.

gruskada: "Power Cycle"
It was now chaotic again, though there was no task now

It starts out interesting, very good effects, good guitar sound.
Very, very good between 0:27-0:50, then it doesn't develop, it's more of a total chaos.

It’s also a good thing sometime, but now I didn’t like it much. Although I understand the idea, but it didn’t go as well as it did in the last time. But I liked that you introduced the violin at the end. It was pretty good.

Jack.Olentein: "Future Rider"
Good production, tasteful, really good background music for motorbike, travel videos, for example. On the other hand, I would have expected something interesting along the way, but didn’t want to arrive. A little too ambient music for me. (The almost only Cmaj - Fmaj progression without any variation not really exciting, but it is also true that to compensate this, the drums & fx variations during the song are very good.)
Good mix, clean elements, very professional overall. Needs more dynamics, more variation. Maybe missing a clear melody line at the top sometime.

SimaGT: "Soultribe"
A Prodigy style song with an eastern twist.
Good song, nice intro, good development. I liked very much the "eastern" parts (vocal, percs) but I didn't liked the vocal samples, which are direct prodigy imitations. Sorry for that.

I can't add more, it's well made, well put together, usually everything in place.

Olli H: ”Reboot”
Interesting song.
I like the chorus part. It seems that a good melody line is important for you

I don't understand the sounds at 1:27 and at the end.
But I liked the "acid" bass line and the effort that you tried to do something different than usual.

Doc Jon: "World Reboot"
Another Prodigy style song and this chorus part is the clearest imitation unfortunately. But the song overall its pretty good.
The clean guitar riff is very nice.
I appreciate the good lyrics (for everyone: although next time it would be good to write lyrics in the description for those who are less fluent in English

)
And you should make a tutorial video on how you can achieve such an organic and natural sound with these vsts. Quite a lot could be learned from it. Good mix, nice sounds. I liked.

A friendly reminder:
We're in the final 24 hours to submit your feedback and cast your vote
Top

SimaGT wrote: ↑
Tue Jun 30, 2020 08:59 CEST
Hehe i can recognize EastWest stuff at begining, nice intro. Did you performed those strings?

Yeah, it is a very recognizable sound

I still love using it, though. I performed the strings all with closed voicings, then modified the MIDI to make them open chords in the last section, and to fix timing issues. I also cheated and used the "full orchestra" sketching patch so I could play it all once, and then just separated the double bass out, and switched that to SoundIron Hyperion Strings for a more dry sound.

got no excuse. wanted to right the reviews today, but i was at hospital to visit my mother , than drinking and eating with my friends and than doing the same on another place. Now, it is 23.22 and we are still here. i feel bad. sorry
Top

Sadly, not all participants have submitted feedback and cast their vote (bedlamward J I L L I A M), we therefore have 2 disqualifications due to lack of participation.


I will post the results shortly (as in - within the next 72 hours), please have an eye on this thread.
(this is not an automated process)
Top

Hi . i think i went into the wrong comp . oops . got disqualified for not commenting on your tracks but i still cant find a way to listen to them . must read the small print next time . Good luck anyway
Top

I might finally understand what is going wrong for you, @bedlamward.

I think you actually wanted to join SWC033 / May, which had the genre "Avant-garde Rock/Metal". But unfortunately, the game has ended on 24th May(!) already, But not only did you miss the time-frame for the game, you also kind of mixed up how the forum works.


Each Songwriting Competition runs from the 1st of the month, until the 24th of the month.

Once all entries have been posted and the submission period has ended, all songs (at least for the SWC) are then collected into one post for everyone to access to. In case of SWC034, that can be found here (please click this link) or linked to from the first post of the thread (see last paragraph).

The Rules and Guidelines are linked from the first post as well.

I am sorry - but it does indeed look like you need to read the fine print again.

Also @J I L L I A M - I am sorry that you couldn't make it this month. However - if you continue to break the rules regarding uploading your songs and then ultimately deleting them (the songs need to be accessible up to 40 days post game end!), I have to exclude you from further participation.

Ladies and Gentlemen, here are the results of Songwriting Competition 34

The winners podium consists of:
Apologies for the waiting time, this is not an automated process.

<4 participant rule is not in use (staff comments and votes)
We have 2 disqualifications (J I L L I A M and bedlamward, no feedback given)
We have 0 votes after the deadline
We have 0 users that tied "Sole (License) Winner" rule does not apply - 3-position Winners Podium

Here are the results as chart in image form: 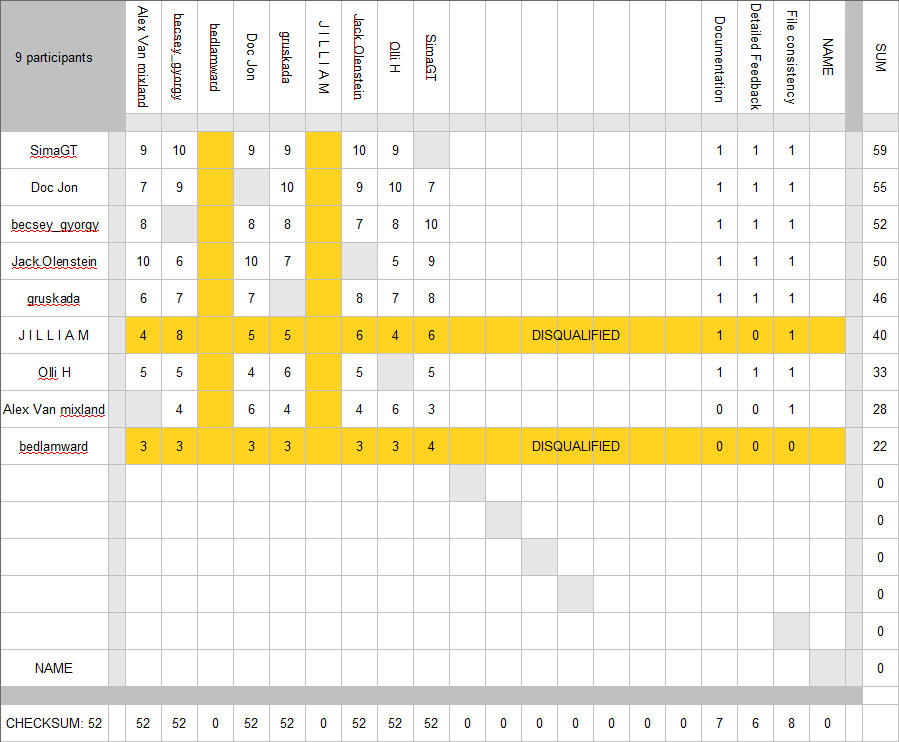 Thank you so much for your participation.

We'll now perform with the usual. Selecting licenses is handled in public. Please select one license/company out of the pool (in order of the winners podium) and mention it in this thread, then (important) please get in touch with me (via PM) with your full name, email address and your license selection.

As usual - you're not forced to pick up anything. You can pass and therefore offer more to select for the next person in line (if there is a spot existing / not available for "sole winner" mechanic). Just let all participants/winners/the staff know in a timely manner.

Feedback about the "Songwriting Competition" is welcome (please do so here).

See you in in the next challenge!


Please help spread the word to get the Songwriting Competition to 15-20 participants on average.

Ty all for feedback and thank you to everyone who voted for me, it was a fun month.
I would like to choose Tone2 Saurus2 as my prize please.

Hopefully this competition will reach it's 15-20 participants monthly goal soon.
I will skip this month , but will be here in august so see you guys soon and ty.
Top

Thanks to Mister Fox for organising

I will choose Luftrum Lunaris as my prize please

Many thanks as always for all the helpful comments which I have taken onboard, I have already added the lyrics to the SoundCloud track page
While we were all scoring and voting I put together an accompanying video as well if anyone is interested